If you’re looking for DIY options this summer, you might want to check this out:

Here’s something worth trying.

I think you could do it for potatoes but why not strawberries, herbs, even carrots or other root veggies. Or leeks – you could do a great job of mounding up leeks with a system like this.

So, because of a glitch – and this one wasn’t a user error, thank FSM! – this post is a week late but here it is.

It seems Athena has just entered the heat cycle. What’s entertaining about that is that she’s a new adult who appears to be a bit unsure about what the heck is going on. Zephy, who is definitely not yet an adult, knows he’s supposed to be doing something but is trying to figure everything out. She’s not in standing heat so she’s not really that interested but she’s kind of interested. It’s hilarious and they are making the most unusual noises. I took a little video that is very poor quality (just used my phone and it’s nearly dark) but so worth a listen.

They’re clearly talking and courting -in a very teenager ‘I’m really into you but get lost’ kind of way. The vocalizations are so out of their usual sounds that LG came in an said “I think Athena’s choking, she’s making a really strange noise.”

So, with no further ado… Well, some further ado. It turns out wp doesn’t want any video. I think I can up them to youtube and link to there.

Here’s a picture from the jostling to tide you over.

That’s Zephy (white) and Athena (tri colour with her butt pointed towards the camera). Poor Percy is on the right, trying to figure out what the heck is going on.

Update: there has been a lot of cuddling and smooching between Athena and Zephy but no more of this behaviour. Me thinks she’s bred but we’ll see what happens in about three weeks.

No, we were at a family wedding that took place on Friday. It was a gorgeous day in the middle of nowhere (best place to be) but it’s hard to be away from home. First of all there is that feeling that if I have a week… oh the things I could get done if I was at home. And second – the food. Oh the food. Rich, delicious but celebration food, not meant to be eaten for such a long stretch.

So now it’s catch up (and by catch up I clearly mean procrastination given that I’m here and not doing any of the things that need to be done) and heal. I have a cold that was going away but took advantage of my weakened state to resurge and I have to get my diet back to normal. It was a good experience though, it made me realize just how easily it is to get re-acclimated to unhealthy eating.

The good news however (because that up there felt like a bit of TMI whining!) is that we have got hay in, half of the straw we need and a new goat shed. Well, it needs a roof but most of a new goat shed. J has been busting it to get all of the fall chores underway now that we’re no longer besieged by wasps. The woodshed too, is filling quickly. Good things all, because autumn may be shorter than usual. We’ve had a wintery bite to the wind and wintery looking clouds.

Now to start some beans soaking for tomorrow night’s supper and hopefully today I’ll get some fall gardening done. All of the interloper chickens (well, except Elegant, the mother hen) were caught last night and had their feathers trimmed to prevent further forays into the garden. Maybe, just maybe, this will allow me some success with the fall crops that are bursting out of their trays in the greenhouse? 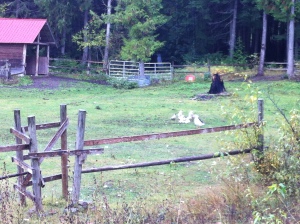