This is seriously worth a read. It’s light enough to be entertaining but there is a ‘home truth’ undercurrent as well.

Well, there is too much to do today. How do I know when the day is so young I shouldn’t know how it will unfold? Simple. Not only do I know that I have about a dozen chickens to process this morning (before it gets hot) I have this: 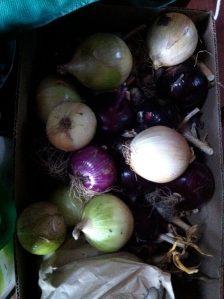 lovely box of onions and garlic to process.

And two of these:

to turn into kraut. That picture, by the way, does not do them justice.

And yes, there is an epic box of plums waiting to have something done to them, remaining pears also waiting for something (jam or dehydrating, not sure which), more rosehips to pick and process. Which reminds me, I found the best link for dealing with the little hairs:

I cannot wait to have the time to cruise through this site. It’s one that I think I would really enjoy.

So, there is also the garden to be dealt with. Lots of weeding is needed as well as preparing for winter crops. And getting hay and mucking out and and and. I am often asked how I manage to get everything done and the simple answer is that I don’t. I am always prioritizing what can’t wait (like the meat birds). I have a good month until the first real frost so there’s time for rosehips, garden beds are a higher priority, as is the fruit but likely I’ll just ask for all hands on deck to help with it and we’ll manage. If we don’t, the fruit becomes eggs by way of the chickens and ducks so I am always inclined to remember that on a farm (no matter how small) all is rarely lost.

Now, I suppose I ought to get to it.

Well, as it turns out, my confidence in my lovely garden may have been a wee bit misplaced. In addition to a picking failure in which my absence meant ripe beans went unpicked and in turn, start to turn to seed, therefore, become tough and stringy but not yet ripe enough to eat as dry beans; my adorable Muscovy babies have nibbled the heck out of my cabbage, and decimated my lettuce (yep, I still have edible lettuce). But seriously, how can you get angry at this? 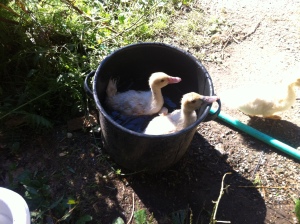 In addition, the baby chicks (just hatched and adorable) have also infiltrated the garden. Because they come from a long line of vigorous scratchers, at a few days old they were able to up root my almost mature onions, eat a fair few of the rare, ripened cherry tomatoes and add to the cabbage destruction. But I can’t be too angry with them (and if they’d stop moving for long enough that I could get a picture, you’d see why).

Now if we were truly dependant on the garden, this would be a huge set back. And I do mean huge – between the bean (including broad beans) failure, the scratched up peas by one hen that I just realized re-scratched them up therefore ruining my fall crop plan, the lettuce and cabbage eating and the aphids that have destroyed the kale, we have lost I don’t even want to think about how many lbs of food. It’s made me realize what it would take to be truly self sufficient.

All is not lost however, I have still got the green house (bursting with herbs, peppers and tomatoes are just starting and cukes are coming slow and steady), sprouting seeds, potatoes, some carrots (I think – I hate to check as they were poorly thinned) and abundance in my area. Not only is today market day but we have been the lucky recipients of pears, pears and more pears as well as plums, plums and more plums. Much is being put up (mostly dried) for this winter but there’s enough to keep us in produce. Also – we have two GIGANTIC zucchinis that were picked before the infiltration. I’m going to try krauting at least one of them with just salt and maybe a bit of vinegar. I’ll keep you posted on how that goes. So all of that plus there’s got to be stuff to forage – perhaps now is the time to try the wild greens we know are growing everywhere (including the garden).

Anyway, I have no shortage of things to do today. And tomorrow we’re butchering meat birds (so long as the wasps aren’t posing a problem). It will be a very full weekend.